Emery had been well known for many years as a top Imp-tuning expert and champion competitor.

Paul Emery Cars had a selection of offers for Imp owners:

This indefatigable special builder from the 1950s built a wide variety of cars under the Emeryson banner, and competed in the 1956 British Grand Prix in an Alta-engined machine.

After WW II, Paul Emery took over Emeryson Ltd. from his father, George Emery, who had been building racing specials since the 1930s. His father, George (Georges René Emery [Emeri?], a Frenchman who served in the British Royal Flying Corps during WW1), built cars back in the 1930's. Emeryson Ltd was bought by American Hugh Powell in 1961. Emery agreed to stay on as the designer and designed the Scirocco car. For 1962 Powell established Scirocco-Powell Racing. 'Emerysons' were renamed Sciroccos and fitted with BRM engines. Paul Emery remained involved until the end of the year. He then turned his attention to engine-tuning, before developing Hillman Imps for racing, while his brother? son? Peter carried on the family tradition of building racing cars with the Formula Junior Elfin.

Paul Emery and Willy Griffiths (who came from Roger Nathan) went straight to work on the Imp and got a motor together that was very fast indeed.

After the Imp appeared in 1963, Paul Emery Cars specialised in making the Hillman Imp and Singer Chamois extremely fast. He announced in 1963 a rather neat little GT coupe, built round Imp mechanical bits and pieces. At the time of the article in CCC, Oct. 1965, they were in the process of making one for an American customer.
In 1964 they produced the Emery GTI. Paul Emery Cars prepared and tuned Imps to all shapes and sizes for road and competiton use, as well as marketing the GTI as a sort of complete car.

In 1964, he appeared at the Racing Car Show with a lowered, rakish line in hot Imps.

The machine shop, even though it's tiny, has a crank-grinding machine and a vertical mill: reboring is done on the premises. The Emery men tackle their own blocks, cranks and pistons, which are usually special castings of their own. Rootes pistons are rarely used, although in some capacities it fits nicely. In the 998cc engine, the Rootes 72.5mm bore is just the thing for the job.

Lowering the roofline is also done on the premises. They do it often enough to be very good at it, and the cutting and re-welding can't be detected.

For the Nürburgring race of early September 1965, the two Emery Team cars were prepared with a transistor ignition system, developed by Willy Griffiths and based on a system by Klinger Controls Ltd. This was expected to improve sparking over 6000 revs.

Paul Emery Cars were well-known for their rapid Imps, and apart from tuning and performance conversions of full-sized Imps also do the Emery G.T.I., which is basically a tuned Imp on which the body has been modified to lower the roof line by four inches, with special seats to provide full headroom inside, a shallower screen and more steeply-raked rear window, along with improved performance from the engine room.
As well as various stages of tune, Emery also offers a 998 c.c. conversion and is also prepared to open the engine out to 1,150 c.c. which, combined with the Stage 4 conversion normally applied for racing versions of the 1-litre engine, undoubtedly produces some real urge.
He could also supply suspension mods and glassfibre body parts, wide-rim wheels and front-radiator kits, including the rad itself, all plumbing and an electric fan.

Paul Emery Cars - Stand 73
The Hillman Imp-based Emery GT is the main display; this little car made its debut at last year's Racing Car Show and created a great deal of interest.
Also on show was the full range of Imp tuning equipment, ranging from the modest head and manifold changes to full-blooded race conversions
2 Aspenlea Road, London, S.W.6. (Fulham 2763.)

[...]
Since then Emery turned his attention to saloon cars, and exhibited a modified Hillman Imp at last year's show. This was the Emery GTI, with lowered roofline, which was raced towards the end of last year by Bill McGovern.
Shown this year is the Emery Super Imp - a low cost, high-performance car for the customer who wants a 'drive-away' purchase with no doing-it-yourself strings attached. This car is equipped with twin carburettors, modified suspension, including an anti-roll bar, and offers 90 mph performace and impeccable handling for only £ 40 more than the car's basic price.
Available for demonstration throughout the show is the Imp GTI (a 125 mph job), and a selection of proprietary accessories is also on view.

Norbert Dietsch worked for the late Paul Emery. He also decided to enter himself as a driver and raced for around 4 years across the UK in Oval circuits where they averaged 16 seconds per lap on 1/4mile Oval circuit! This was either on a shale, tarmac or concrete track in a car that only had a 1150cc Hillman Imp Single Overhead Cam engine.

The best race of my life was @ Brands Hatch, it was the last race of the year & we had already won the 1300cc Championship. BMC asked if we would fit a 1000cc motor for this race to try & beat the Fraser Imps, that had been running rings around the Minis all year. We did ! After practice the grid was: front row the 2 Imps with the A40 in the middle & that's the way the race went. The people in the stands were standing & cheering on the battle. We came 2nd & all 3 cars were within a few feet of each other at the finish. When the car got back to the paddock area, you could see tyre marks on both sides of the body from the Imps. Great Race. Of course I then went onto work with Imps with Paul Emery. The above period was 1964-66.

Ron Parkes, of Marcos fame, used to work for Paul Emery on the Emery GT and Emery's version of the Twin Min and was by autumn 1966 either in partnership or working for Jeremy Delmar-Morgan.

John Markey (1938) first competed in motorsports in 1963. In 1966 he was Technical Manager of Fiat at Wembley and raced in England, and on the continent at Nürburgring driving an Emery GT. 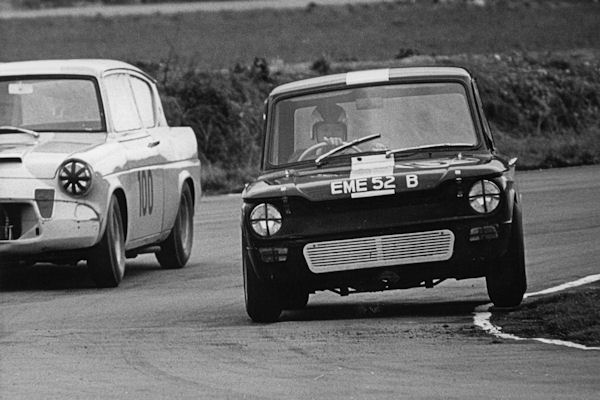 Presumably Paul Emery himself in an Emery Imp at the Snetterton circuit - event and year unknown.

Hello, I was involved with Paul Emery in the 1960's, firstly with the F1 cars and then with the Imps at Aspenlea Rd.
The photo which purports to be Paul at Snetterton in EME 52B is actually Bill McGovern.
Best wishes

NRF = Not Running at finish
DNA = Did not arrive

Two Emery Imps were entered in the Le Mans 24 Hour Endurance Race of 1965 in the 1300cc class. They were to be driven by Paul Emery and Chris Lambert. They were not accepted.

At the speedshow at the Walthamstow Stadium in January, in the evening racing started. The first of two rallycross 'races' with Bill McGovern in Paul Emery's Imp saw Griff Griffiths off in his VW-Porsche.
[Then more serious stuff: a couple of midget dices, Paul Emery and Tony Stubbs (both in Dastle Mk 7s) and Hot Car's Tony Bostock (Dastle Mk 3) showing up best.]

Stadium Saloon Car demonstration race at Walthamstow Speedshow saw the Emery Imp (with Bill McGovern at the wheel) lead the field of rallycross drivers.
This Emery Imp was said to be hot competition in Class A - 850cc to 1300 cc - probably also driven by McGovern.

Imp improvements. - Cars and Car Conversions 1966, September. - p.185-188
About the accessories and equipment available for the Imp.
reprint in Unique Master Portfolio. - p.46-49
according to reprint dated 1967