Graham Robson: [...] the body styling was altered after tooling commenced. Lord Rootes demanded that it be widened and increased in wheelbase [...]

Windscreens
Chamois coupé and Californians were originally fitted with 3/16" thick toughened windscreen and Stilettos ha 1/4" laminated screen. This of course means there are two types of windscreen rubbers.

If you have major leakage problems:
Large amounts of water can't seep through, unless there is a collecting area behind. Consider where it might be collecting. Maybe it is running off the roof or bonnet. Water off the bonnet usually runs forward...
It is suggested that not all Imps have waterproof roof/body/gutter joints. Filling the gutters with sealant may help flooded front foot wells...

Prevent rust
Use Waxoyl
or Black Knight rustproofer fluid (messy and smelly but good
or use Hammerite
or ...
but be sure to prevent rust
Remember that all rust-proofers are even more effective if re-applied annually, as they do tend to get blasted off by stones. Once rust gets a grip on steel, there's no way to stop it, other than replacing the infested area with new metal.
Prevent the rust in a bonnet by preventing the condensation from forming inside the lip's double skin by using Waxoyl or a similar rust preventative. Also make sure the rubber sealing strip at the front is in good condition (and preferably fit a new one with Waxoyl behind it). As for the rubber strip that is stuck to the rear edge of the bonnet near the hinges, some say that this is best removed (if still attached) as it tends to soak up rain like a sponge.

Wheel arches
Ford Fiesta MK1 rear wheel arches can be fiited. These are a close match to the originals, and go on very easily-they even have the right contour line on the top of the panel.
These cost 9 each, which is a darn sight less than the 44 each I was quoted for the genuine Imp arch. However, you must fit them in pairs, since they are slightly different, but they look quite good when fitted as a pair.

Fibreglass panels
Fibreglass Front wings
Some of the Smith & Deakin wings have been inspected and they look to be well finished and of good quality. They come in a white jel coat.

Chrysler Imps had the door handles positioned ½" further back.

The 1969 doorlock was supposedly not as easy to pick. Because the doorlock (Hillman Hunter type) is totally different, you can't use a Rootes door on a Chrysler Imp or vice versa.

Bonnets
The fibre glass bonnets are really intended for competition, where lightness is important, and consequently, the fit is not very good. However, there are differences. There was talk of Imp Service in Selsdon (Dave Botteril) having made proper ones:
• looking exactly like a steel bonnet from the outside
• including the double skin inside at the front onto which the release catch (etc.) can be mounted
Autocar said in 1965 of the Hartwell group 4 Imp: "We noted an excellent standard of finish on the moulded plastic boot and engine cover panels."

Rootes used to have perspex engine lids for shows. The Imp Club has one of these rare lids.
In the 60s, Rootes had an Imp with a perspex bodyshell. It's unknown where that one went... See the message from Bob Clarke to the right.

photo: TSPL. At the Scottish Motor Show of 1963 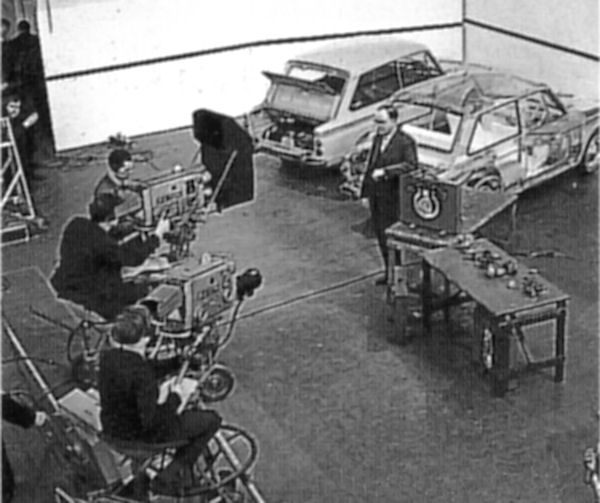 Perspex Imp in a BBC series


There are no spoilers now made for an Imp. You might use a simple strip of glassfibre glued along the front edge of the car. You might get one from Malcolm Anderson, Suisse Auto, Reg Patten, or somewhere else.
Or you could make or adapt one from another car. Anything which stops air getting under will help. Imps are very bad for airflow and can get very light at the front at speed. A spoiler works very well to prevent this problem.
Taken from the Editorial by Martyn Jones of Impressions Apr/May 1986:

I've had a few enquiries from members regarding the availability of fibreglass panels etc. This led me to contact Hatcher & Clement at 1a Maple Road, Winton, Bournemouth, Dorset. Tel. Bournemouth 523782. They do a high quality bonnet, boots, front ends, arch extensions and a front spoiler. A few years ago I fitted a fibreglass bonnet and boot to one of my cars. The total weight saved was almost ½ CWT ! Hatcher & Clement have managed to obtain the original mould for the Hartwell front spoiler. Anyone who has used one of these will vouch for a) its effectiveness and b) its appearance. It is a bib spoiler which looks the part on the Imp and should not be confused with others on the market. So, if you're fed up with wandering in the wind (and who isn't ?) fit one and marvel at the improvement.


Nick Lamb put a model in a university's wind tunnel. He also designed a full aerodynamic bodykit for the Imp. There's a 1991 report about this, suplying a lot of information about drag, lift etc. for the Imp.

Plastics
For replacing plastic parts that are unavailable you might consider making them yourself. Make a mould using the old one and use a paste like Bond-o-fill. (Impressions 1988, no.5)

Underfloor sealing
Private and confidential Service Bulletin No. 0.34 (January, 1965) on the subject of underfloor sealing. Suppl. to advice previously issued. -- see: Impressions 8 (1988), no. 6
"When you are called upon to rectify water leaks into the rear or front floor, it is recommended that the following operations are carried out where found applicable."

It is possible to mould existing badges, using silicone. (Eg. from a firm called Tiranti). The silicone costs about £10-20 for 1 litre.

Based on 407 accidents reported to the finnish insurance companies. Flat, convex and multiradius mirrors - The study maybe implied that minimizing the blind spot is likely to be more important than providing an undistorted image. This would support the use of multiradius and convex driver-side mirrors.

Bumpers
New bumpers do not come complete with the irons. So you'll have to rescue the old ones, which is not easy.
(Grimes - £25 for one Sport type bumper; not many in stock).
Bumper bolts
If you can't undo the bolts, then break the nut from around it. Drill through it with a very small sharp drill (as close to the thread as you dare). Then use a chisel and hammer to snap off the nut, leaving the bolt intact.
Or tighten them up till they snap, which they do quite easily.
The bolts have a normal thread pattern (UNF), so finding a replacement nut should be easy.
If you can't reuse them, you will have to find four bumper coach-bolts.

Vinyl roof
The black vinyl of a Stiletto roof is of a much finer grain than Opel, Ford or Volkswagen used to use.

The fabric top on CPH 121B was sprayed on by an authorised 'Luxcoat' sprayer in 1968. SB (Insulation) Ltd. used to have a network of dealers. They themselves were located at 1281 Stratford Road, Hall Green, Birmingham 28.