It is said that the Imp has the aerodynamics of a brick outhouse. This means that there is room for improvement.

The study of air in motion, the reaction of air to the shape of the Imp. The four forces are:

The aerodynamic shape of an object can be expressed in a few index numbers. One of these is the resistance or drag coefficient, Cw. Cars don't usually have a higher value than 1, but for a few truck-trailer or car-caravan combinations. The drag coefficient for the Imp saloon is around 0.385 and that of the coupé version a little higher: 0.395.

This coefficient is only valid for travelling in a straight line (forwards). Ofcourse the wind comes only rarely from straight ahead. In wind tunnel research the angels from 0° - 30° may be measured, but only the coefficient for 0° will get published.
Top speed measured on days without wind will always be higher than on days when the wind comes from an angle, even if you take the mean speed of going both ways.

The way you work out drag on a car is with the formula:

The coupé frontal area is lower than that of the saloon, therefore, even although the coupé has a higher drag coefficient, the drag force (ie. what slows you down) is much the same between the two cars.

If however, any ancillary aerodynamic devices are added for slot racing (ice-)racing / rallying etc... such as bib-type spoilers, roof mounted spoilers, front mounted radiators, wide wheel arches etc these are likely to increase the drag factor by quite a lot (but often increase the aerodynamic stability and grip of the car). Small changes in spoiler and wing design will likely affect the total drag factor by more than the difference between coupé and saloon 'clean' drag coefficients.

In a situation where an Imp is cornering: when the incident airflow on the car is not straight on, the coupé with a lower roof line will probably have less drag). Anyway, the drag factor for Imps doesn't matter that much: it's because they handle so well. 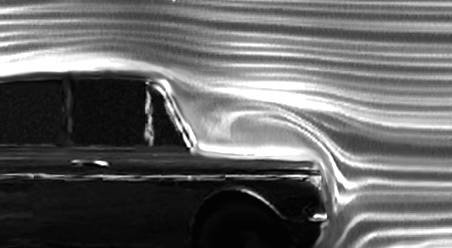 The large vortex situated on the bonnet/windscreen is the separation bubble that spoils the lift over the bonnet [remember from Bernoulli that dynamic pressure varies as the square of velocity, so that lift is generated from fast flowing air over the top of a bonnet]. The vortex is a 'bibble of slow moving air, and thus the suction force over the bonnet is reduced.

The main use of bib-type front spoilers is to cause a stagnation point (i.e. stop the air) on the front of the car rather than somewhere underneath the car (which would cause lift). The bib-type spoiler is probably the only useful Imp aero add on. However, if used in conjunction with a front mounted radiator, the situation is more complex. If the radiator vents are on the bonnet, the bleed air will re-energise the air over the bonnet, destroying the vortex and actually creating lift.

At the end of the 40s, early 50s, car producers did not often have their own windtunnels. MIRA in England saw a lot of research on full scale models, even designs from the continent.
Enzo Ferrari: "Aerodynamics is for those who cannot manufacture good engines."

The aerodynamic point of pressure (A) is the spot where the transverse force seizes - the wind that tries to blow the car off course. Then there is the point of gravity (G), the point where the downward force seizes, the gravity that keeps the tyres on the road. For optimum course stability A should be behind G. For racing cars this can be done, but with ordinary road cars, it's already neat to have A only a bit in front of G.

Point A differs with the angle of incidence of the oncoming wind, just like the drag coefficient.

After WW II, a shape with a lower drag was offered in favour of a shape with a better position of A (in relation to G), meaning a better stability. Before WW II designers mostly concentrated on as little drag as possible.

To keep a car properly on the road, one wants to reduce the forces that cause lift. Part of the engine power is used unpurposefully to lift the car.
Devices to influence (negative) lift: wings and spoilers

An aerodynamic bodykit for the Hillman Imp /
a report by Nick Lamb. - 1991

What I have of this report is three A2-sized graphics, fotocopied (B&W) onto six A3 sheets. Two depict an Imp with a combination of spoilers that mr. Lamb appearantly reports as the best, seen from two different angles. The statements I've listed are the comments added to these two drawings.
The third one is a chart showing eleven Imps (fitted with all sorts and combinations of spoilers), with arrows indicating the relative sizes and the directions of the lift (yellow arrow), drag (orange arrow) and pitching (red arrow) coefficients and also the order in which they were tested.

This drawing is part of the chart mentioned above.
The red arrow pointing clockwise means negative pitch.

Unfortunately the photocopies that were send to me have an artsy background that does not allow me to scan the drawings easily. The one above had the least bits stuck to it, so I could edit it. The tree growing out of the roof indicates that this combination of spoilers is at the end of row of tested possibilities. I think this is the one that N. Lamb made those two A2-sized impressions of.

In Impressions of August 1997 (p. 8) there is a photo of an Imp Wind Tunnel test model. Graham Beddoe arranged the loan of this quarter-scale model from MIRA for the NEC Club Stand, 3-5 May '97. It was insured for £5,000.

trying to understand the what and how I'm reading bits on aerodynamics. As you can tell from what's below, I'm not making much progress...

Books (I found these titles at Amazon, no recomendation intended, no relation to Imps:)