The number of small design changes became so large that it was decided that the Imp ought to be reintroduced in September 1965.
Mechanically there were major changes, some were new, some had been used over the past few months without making it an issue to the public.

These Mark IIs were fine cars. They were reliable and quiet. But dealers and customers had lost faith.

Two of the Imp's revolutionary designs kicked the bucket.

The basic saloon was dropped from the range.

In 1967 all cars benefitted from a rearrangement of the front suspension to remove the excessive camber.
The only real changes in the chassis for the whole of the Imp production run came with the Mk 2. Basically the central pivot of the front suspension was lowered to correct the 'toe in' of the front wheels. New (longer) drop brackets and steering rack brackets were used.
There were changes to the spring weights but these were small changes and were standardised to part number 7102489 for the rear and 7102493 for the front from chassis number B.421000101 for a standard, B.4110011227 for a De-luxe, B492004212 for a Sport, B.792001843 for a Chamois Sport and B.301001116 for a Stiletto. I believe these chassis numbers correspond approximately to the introduction of Mk 2. 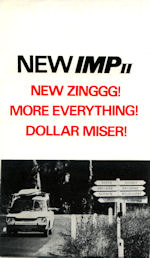 From an Australian brochure:

never badged as such

In October 1968 the Mk II designation was discontinued. The whole range of Imps was revised: all models (except the Stiletto) were given a new interior. They got new seats and upholstery and many variations of external trim. The new facia was full width with a round set of gauges including the speedometer.
This revision is sometimes referred to as the introduction of the Mk 3.

In the 70s the Triple C magazine had a series by David Vizard: CCC Look-in on the Imp. As a basis, most of their tests were done on a Mk II Imp which had covered some 15,000 miles and was in sound condition.

The first thing that was done, was to measure the engine's flywheel horsepower in an 'as installed' condition, ie. all the ancillary equipment such as dynamo, water pump, etc. fitted, plus the exhaust system with silencer and the engine breathing hot air as it does from under the bonnet.
This resulted in 34 bhp at 4500 rpm.

"It is interesting to note that the factory hp figures under standard conditions quote the standard Mk II Imp engine as 39 bhp at 5000 rpm. Although our test engine may not have been perfect, which may have resulted in some of the discrepancy between our figure and the factory figure, we can see that some of the hp drop must be due to the fact that the engine is breathing hot air, and on a dynomometer test bed, as tested at the factory, it's more than likely breathing air at normal temperature.
"However, the 'as installed' figures are more realistic, because this is actually what you've got to push you along the road."