The Imp was innovative in more than a few ways.
In complete contrast to the Mini, which was then in its fourth year, the Imp had a rear-mounted 875cc overhead camshaft, all aluminium engine and driving the rear wheels through a combined four speed gearbox and final drive unit (transaxle). Few other cars of that time had an aluminium alloy die-cast engine. The Hillman Imp was Britain's first mass-produced car with engine block and cylinder head cast in aluminium. This engine slants sharply from left to right, canted over at 45 degrees, to lower the centre of gravity (and leave room on top for luggage).
The single overhead camshaft design;
its unusually high compression ratio of 10 to 1, possible because of an advanced combustion chamber shape.
It had one of the first truly ergonomic facias.

Most obvious of all: it was the first mass-production British car ever to have the engine in the back.
Opening rear window: it lifts to give access to luggage room above the engine. Combined with the folding seat squab, it anticipated the hatchback.
The Hillman Imp was the first car to use a Diaphragm Spring Clutch.
In 1963 it had many features that would not become common in other cars until the end of the 70s: a third 'door'; special folding bench seat in the back; automatic choke; no grease points; gauges for temperature, voltage and oil pressure; light, responsive steering.

The engine drives forward to the gearbox, then back through an orthodox differential to independently sprung rear wheels.
It delivers 39bhp at 5000rpm, giving the Imp a top speed of around 80mph (126 km/h) and 45mpg. Output of the BMC Mini was 37. The Imp weighs 1560 lbs (708 kg) and is longer than a Mini, and just a wide and high. It has 12in. wheels. It has smart but not spectacular styling, after the Corvair fashion. A deep contoured flash down the side gives it a bit of character.
It has good allround visibility: the rear side windows stretch much farther back than in most small saloons.

Instrumentation is simple, with two same-size dials for speedometer and auxiliary gauges gauges. Trim is simple but practical in the Rootes tradition.
The new car was one of the few British saloons to have a heater as standard equipment; it utilises the main cooling fan and pumps air to rear as well as front passengers. To compensate for the lack of any opening side windows apart from the ones in the doors, the Imp's designers have given the trailing edge of the roof a cutaway contour and provided built-in extractor slots for stale interior air.

A row of brandnew Hillman Imps at the factory near Linwood, Scotland.

In the beginning there were overheating problems. Not only due to faulty radiators, but due to water leaks and to faulty water pumps. Blown cylinder head gaskets were far too common. The situation was worsened by the fact that an aluminium head could warp if it got too hot.
Good detail development work solved these problems but not before the Imp was sadled with an image problem.

From a Japanese leaflet of C.Itoh Automobiles: 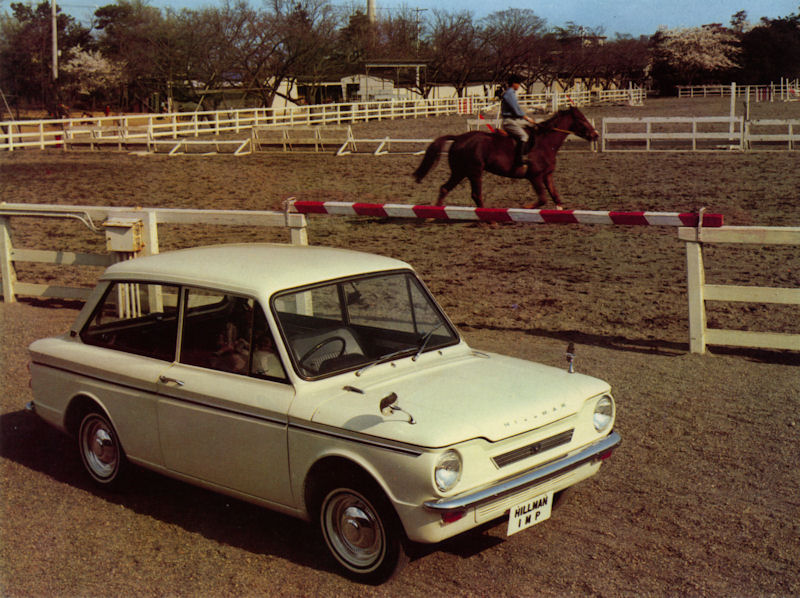 Polar white Imp, the chairs are neither black nor red.